People often know metalwork and metallurgy as the stuff done in welding shops in Edmonton, Alberta, Calgary, and other locations. The noble art of bending metals was born for practical and metaphysical purposes.

Metalwork bolstered the defenses of ancient civilizations, reinforced their power, and commemorated history-making events. Famed civilizations that used various forms of metalworking include:

Like every country on this list, India preserves and revere their metalworking traditions. Proof of metallurgy in the subcontinent was found as far back as 5,000 years ago, mentioned in Sanskrit texts as ayas or metal. Metallurgists in ancient India created intricate metalwork for domestic and religious reasons. They used well-worn metals and alloys such as copper, bronze, and white metal.

Aside from crafting intricate jewelry, ancient metallurgists dabbled in architecture and art. Lasting architectural marvels such as the iron pillar at Delhi and religious sculptures were proof of that. Metalwork was also used on a domestic level. Pottery and household utensils from various periods are still discovered to this day and stored in museums. Though the wax mold process used to create some of these artifacts were lost, new technologies allow for reinterpretations of these works.

Pots, knives, gold leaf, and swords—these are but a few products of kinko or Japanese metalwork. There are three techniques under kinko: hammering or tankin, casting or chukin, and engraving or chokin. Blacksmiths created altar equipment and war paraphernalia, such as swords, with tankin. The enormous and famous Nara Buddha was cast from molds called igata. Sophisticated designs on sword pommels, hairpins, and other fine works used chokin.

Mexican metalworkers got their start with techniques from Peru and other maritime traders. From there on, Mesoamerica created their own styles with natively sourced materials. Copper, gold, and silver were their main materials and metalworkers had them imported. Gold and silver trinkets and accessories were for royals only. Furnaces powered by tricky machinations helped artisans craft their work.

Like Indians, Aztec artisans developed a unique wax mold technique lost to time. Charcoal and clay crafted into molds, covered by beeswax, were encased with more of their kind. After cracking this shell open, they melted the beeswax and replaced it with metal. Creating duplicates became easier with this technique. 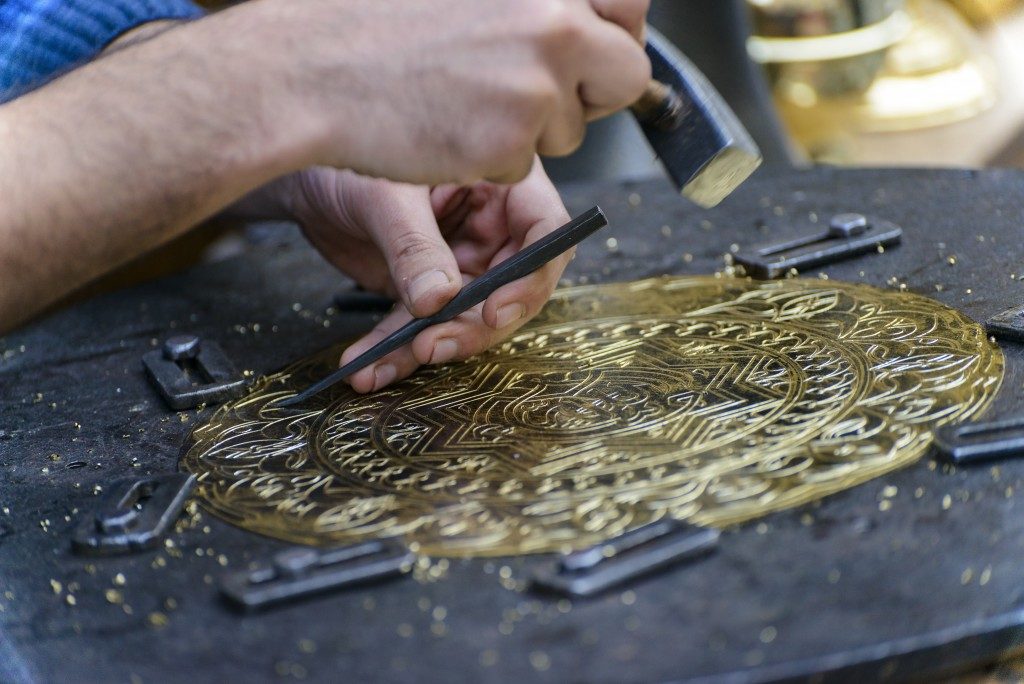 The National Museum of Ireland holds some of the finest examples of Irish and Celtic metalwork crafts on display. The Tara Brooch, Ardagh Chalice, and Broighter Collar are among the most celebrated pieces for that period. Christian art pieces like these are plentiful, while older pieces from the Irish Bronze and Iron Age are sparse. This is in part due to commissions and patronage of the Roman Catholic Church.

Ancient tribes produced plain works—which is why the intricate examples above earned much praise. For the most part, metalwork focused on blacksmithing tools. Horse tack, iron plowshares, and other agricultural tools came from the forge. Swords and chainmail body armor, the first of its kind, also emerged from Celtic forges.

Ironwork, in particular, had great influence in Celtic civilization. Without their mastery of the forge, the Celtic people would not have been able to succeed in their conquests.

Technology pushed metalwork and metallurgy techniques to evolve. As modern-day blacksmiths further refine the craft, metalwork will continue to persist.